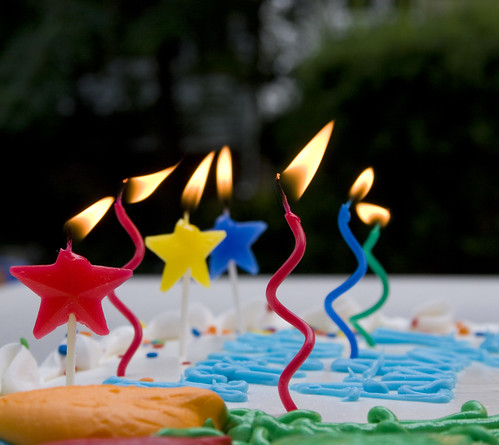 Our family is celebrating 2 birthdays this week.  And not only do both birthdays fall in the same week, the births actually occured the same year.

Now, I’m still not really sure how this happened…my wife says I was suffering from a bit of tunnel vision & simply not listening to reason, it’s all kind of blurry to me.

So here’s the deal.  As we neared the end of 1998, we knew that we would be planting the Ithaca Vineyard, at some point in early 1999.  Since we were going to hold afternoon services until we grew a bit, we decided to wait until a week after the Super Bowl, because as awesome as the Vineyard’s first service was going to be, we weren’t up for trying to compete with that.  Since the game was held the last Sunday in January at that point, we set February 7th as the date of our first service.

Did I mention that Liz was expecting daughter number 3 at this point? (actually, for the first 5 days of her life, that was what we called her since we couldn’t think of a name.)  So, anyways, daughter #3, or Brenna as we call her now, was born on February 4, 1999.  Three days later, the Ithaca Vineyard held it’s first regular Sunday service.

Now that we are a few years removed from the insanity of that week, the question I often wonder is, what would I have done if Liz went into labor  on February 7th rather than the 4th?  (Before people start writing nasty comments below, obviously I would have gone with Liz (actually, Brenna was a home birth, so I would have stayed with Liz), but I’m trying to imagine that phone call with James…(hey, I’m not going to be able to make it for our first service…maybe you can come up with something.)

Liz and Brenna actually came to church that day…& oh yeah, it was a blizzard.  Liz & I are working at trying to keep our lives a bit more sane than we used to…but as you can see, we have a ways to go.

Although we won’t be having an “official” Vineyard birthday celebration this weekend, we will be getting together to watch a certain football game…& who knows, maybe someone’s dish to pass will be cake.  If you’re in town, I hope you’ll join us!

So, what is your craziest birthday story?